A downloadable game for Windows and macOS

Wow Your Game Is Amazing

I think this one was my overall favorite of the bunch. The contrast between the cooking and killing was hilarious and changed up the pace enough that it was really engaging. Only qualms are that you can't do a partial reload!

The guy shooting the zombies looks like if Rick Rude had a twice as jacked son who took culinary skills.

This was a lot harder than I thought, or it's one more example of how bad at video games I am. Either way, it was fun.

Here's my piece of feedback.

Things I liked about the game:

-The name is a really nice pun, I love it

-The music of the game is amazing, even the cooking music

-The MetalGear-ish font for the title of the game, I love it (specially because the character looks a bit like Vulcan Raven)

Things I think that can be improved:

-When I first opened the game, Windows 10 (I imagine other Windows versions might do the same) thought it was a virus because it had no info on who developed the game, you might want to check that because it can scare some of the players.

-I understood what I had to do but not really how to do it. A little tutorial could help. It took me while to get out of the game to see if in the website you explained how to make the bullets. When I saw the video I understood the mechanic right away, but not the recipe. It's a bit hard (maybe it's just me) to see that the ingredients to make the bullets were the recipe, if you can make it a bit more clear it would be nice.

And finally things I didn't like about the game:

-There's no way to get out of the game. The first time I had to use the Windows key in the keyboard to open a different window to close the game (Maybe in windowed mode it would be easy to close it, I was playing on full screen) The second time I just left the desktop window open and I tabbed out of the game. That's the only issue I found in the game.

-When I tabbed out of the game while I was in the cooking menu and tabbed back in, the battle music started playing with the cooking music. I closed the game, opened it again and it was ok.

The game is really fun, I would love to see this game being more than a short project for the LudumDare. The difficulty of the game is fair and the learning process (when you finally understand what to do and how to do it) is really smooth, after level 5 I kinda remembered the recipes so making the bullets was faster and funnier.

Keep it up lads, you're making an amazing job.

Could get some more polish.

Hey! little bit sad how long it took me to play this game but the gameplay was pretty good, didnt know what i was really doing :Pa few tips here and there would've been nice haha, but regardless was  a good game

Hello once again good sir! I loved your game, it was super damn fun and quite the fast paced nonsense fest. I made a let's play of your game here~

Wow, nice review! :o Thank you for patient :> We talking about how balance that ;)

its really hard to cook and shoot zombie overall but overall its a nice and also a weird concept. that create a funny concept and i love it. overall this game is really good. for those who enjoy watching than playing hope you enjoy my video!

Thank you for the attention, and for the review, yeah now is pretty hard survive and make the food, we are talking about how ballance that without remove the rush feeling :D Glad you like it!

XD this is a very interesting and very wacky game. Over all, good idea!

Weird... for some reason, I can't install the game trough itch app

i cant make bullet, i stack 4 ingredients just like in the video but i dont get any bullets. is there a must combinations? or it just a random combinations will give you bullet?

There are combinations. When you open the cooking menu, at your right, you can see the meals and their build orders. :)

good game i loved and played a lot! Its very dificultful cooking and avoid zombies but its a good concept for a future comercial game! improve this game! congrats  !

Vote in my game for ld#41 to: https://ldjam.com/events/ludum-dare/41/card-game-war-game

Art and music are really great. It is a lot of fun, but quite difficult to combine the right ingredients fast enough. I really liked how the character design fit so well in this combination of genres lol. Great game!

If you want to play our entry , here's the link. It's our second jam, so any feedback is appreciated  https://ldjam.com/events/ludum-dare/41/dodgeball-hell

I really enjoyed the pixel art and the music transitions, it really tied the comical element together well!  I will say the learning curve was a bit steep on creating/cooking the recipes.  I felt punished by not being able to move my character while combining ingredients, and even more so when closing the cookbook/menu and reopening it to find that the ingredients I started to combine had been removed.  Great job overall!

Ludum Dare 41 was our team's first event, and we'd really benefit from any feedback you could provide us @ https://ldjam.com/events/ludum-dare/41/eyes-on-the-prize

Awesome game! I went ahead and rated it for you :)

My team member and I would love it if you played and rated our game too @ LudumDare - Tower Defense Paradise! (This is our first ever Game Jam!)

*oh nvmd you already had it tagged correctly

Cool game, although took me 2 tries to realize how to cook bullets xD

Hahaha this is so dope 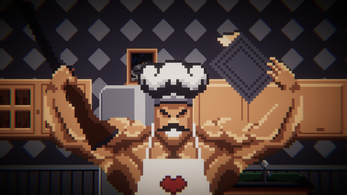 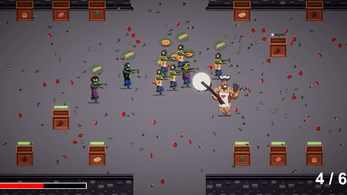 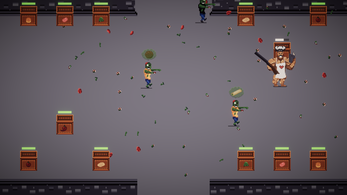